Booking.com
Home Ionian Islands Corfu 5+1 sights of Corfu you should not miss! 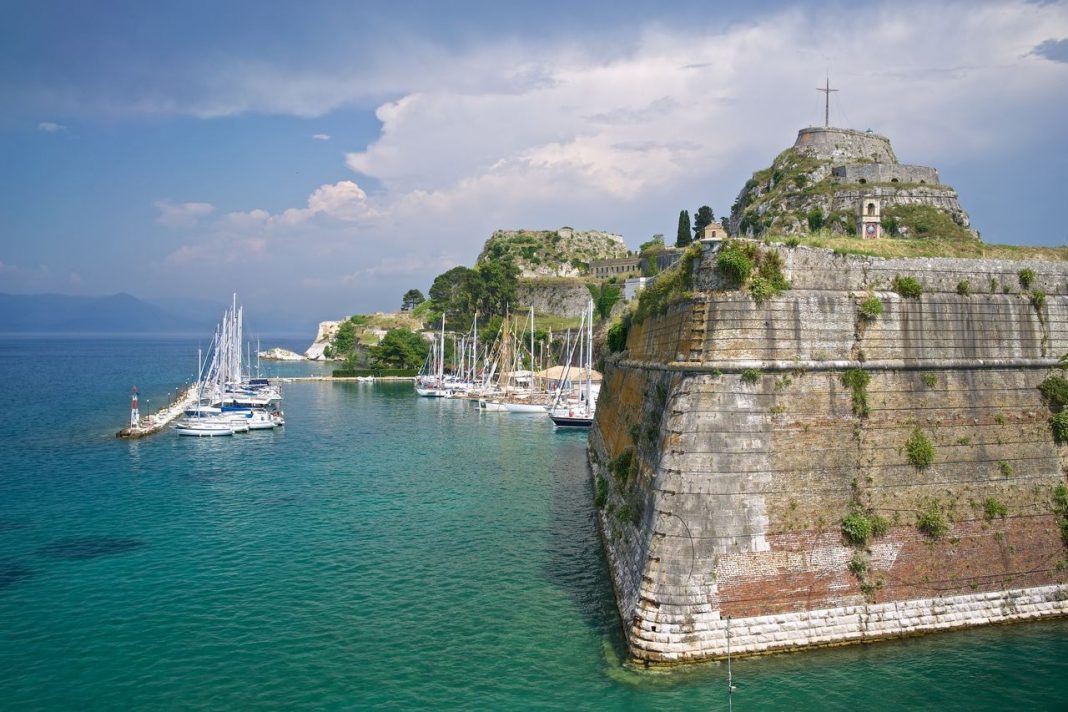 Corfu is full of interesting spots that deserve the attention of the visitor. Besides the beautiful landscapes, the lush nature, the beaches and the picturesque villages, the sights of Corfu enchant travelers from the first moment.

The journey to the island of the Phaeacians is essentially inexhaustible, as every corner hides its own history, with the monuments that survive to our day from the distant past to impress us with their art.

Everyone who visits Corfu, however, has to visit the following attractions in order to feel that he has experienced the atmosphere of the island, its importance throughout the centuries of civilization, but also the atmosphere of Corfu that derives from its glorious past.

Castles and palaces, old villages and symbols of the time of the British occupation that marked Corfu, seeing closely the following attractions will have you understand the importance of the island.

Find the hotel that suits you in booking.com! 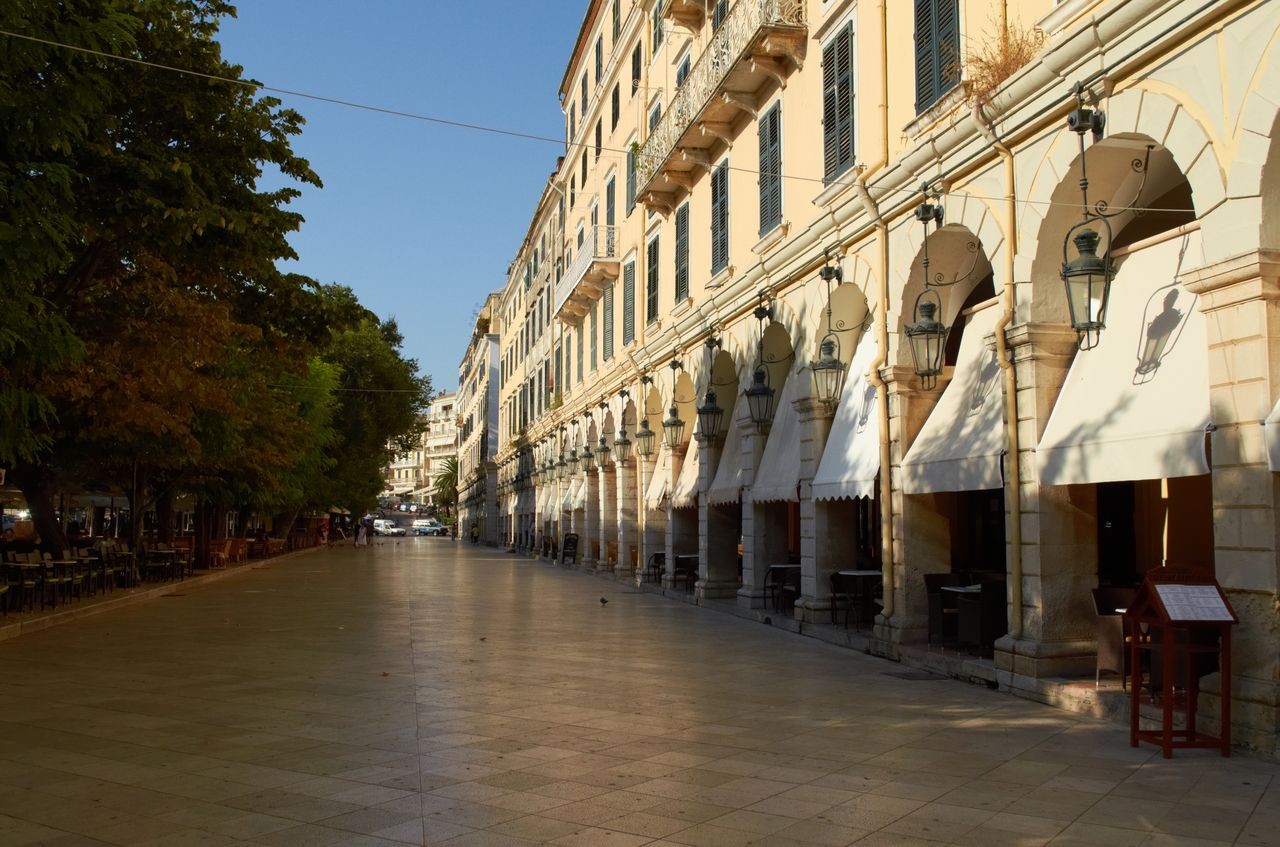 It is the most famous pedestrian area of Corfu, the place where locals and visitors gather, where the heart of Corfiot developments beats not only today but through the centuries. Liston was built in the 19th century and is located at the western edge of Spianada, the city’s largest square.

The imposing mansions that form large arches, form the characteristic picture of Liston, while today it host a plethora of cafes and restaurants. One of the great mysteries of Corfu is the what does Liston mean and from where this name emerged, with the predominant version that attributes it as “on list”, “on the list” and means the well-known Libro d ‘ Oro, the book of the Corfiot Nobles: Only whoever was “on the list” had the right to enjoy Liston.

Besides the Liston itself, which is considered to be one of the most popular sights of Corfu, there are a few other important monuments and points of interest nearby: Spianada, the Palace, the church of Agios Spyridonas, the Old Town with its narrow alleys are just a few of them. Liston is at its best during the Easter season in Corfu when the countless lights are painted with a purple, mournful color throughout the Holy Week. 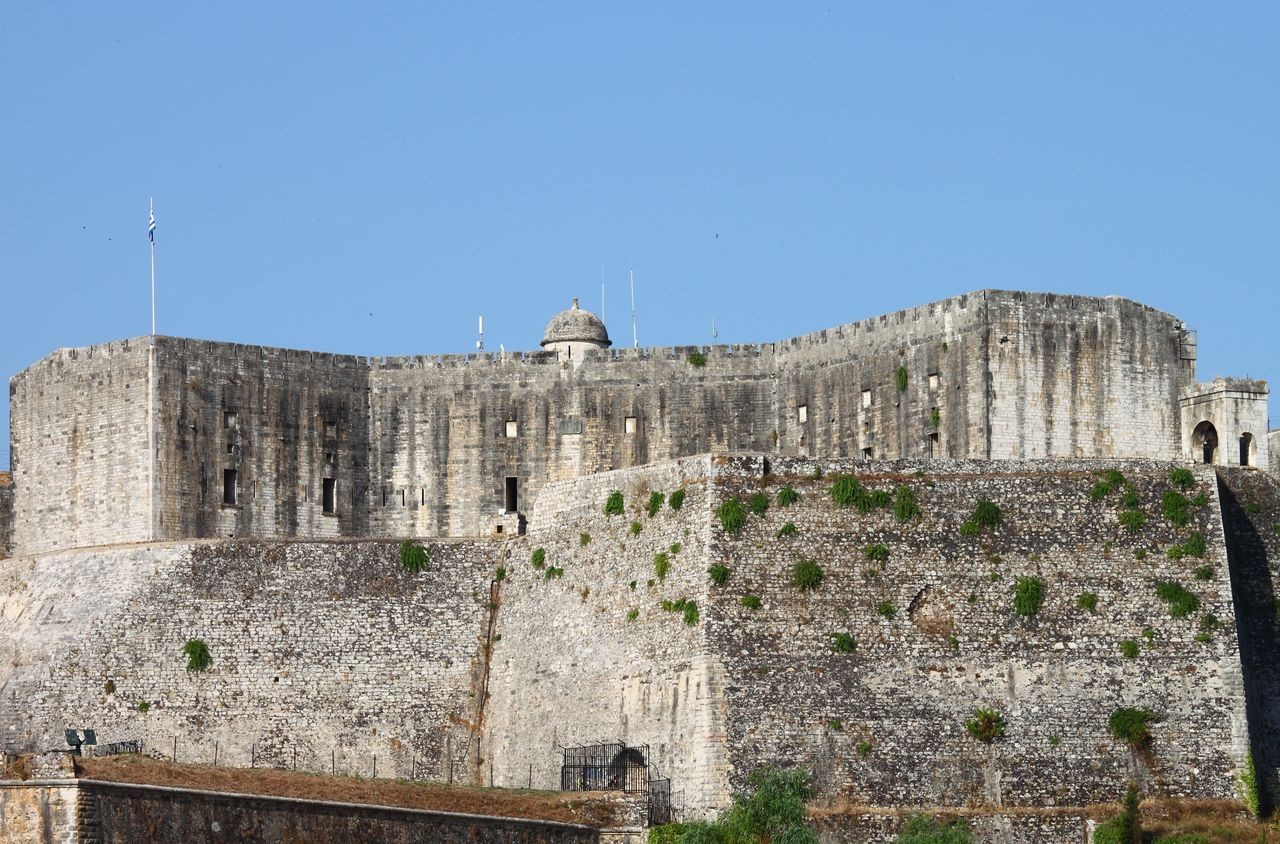 Neo Frourio (which means new fortress) of Corfu with its underground tunnels, arched passages and imposing bastions, offers the best views of the Old City. It stands on the hill of Agios Markos (St. Mark), above the old harbor and was built by the Venetians in the 16th century.

According to popular tradition, for its construction that began in 1576, 10 to 15 thousand workers a day worked and used materials from about 2,000 residences and churches in Corfu. The Royal Gate of the fortress  is decorated with the emblem of the Republic of Venice, the feathered Leo of St. Mark, a real work of art, while the stone barracks built during the British domination today host cultural events, the Museum of Ceramic Art and a refreshment room where one can sit and rest.

The entrance and the ticket office for the Neo Frourio is located in the Old Town of Corfu, at the point where the Solomou Street joins with the tunnel from the Popular Market and Scholembourg Street. 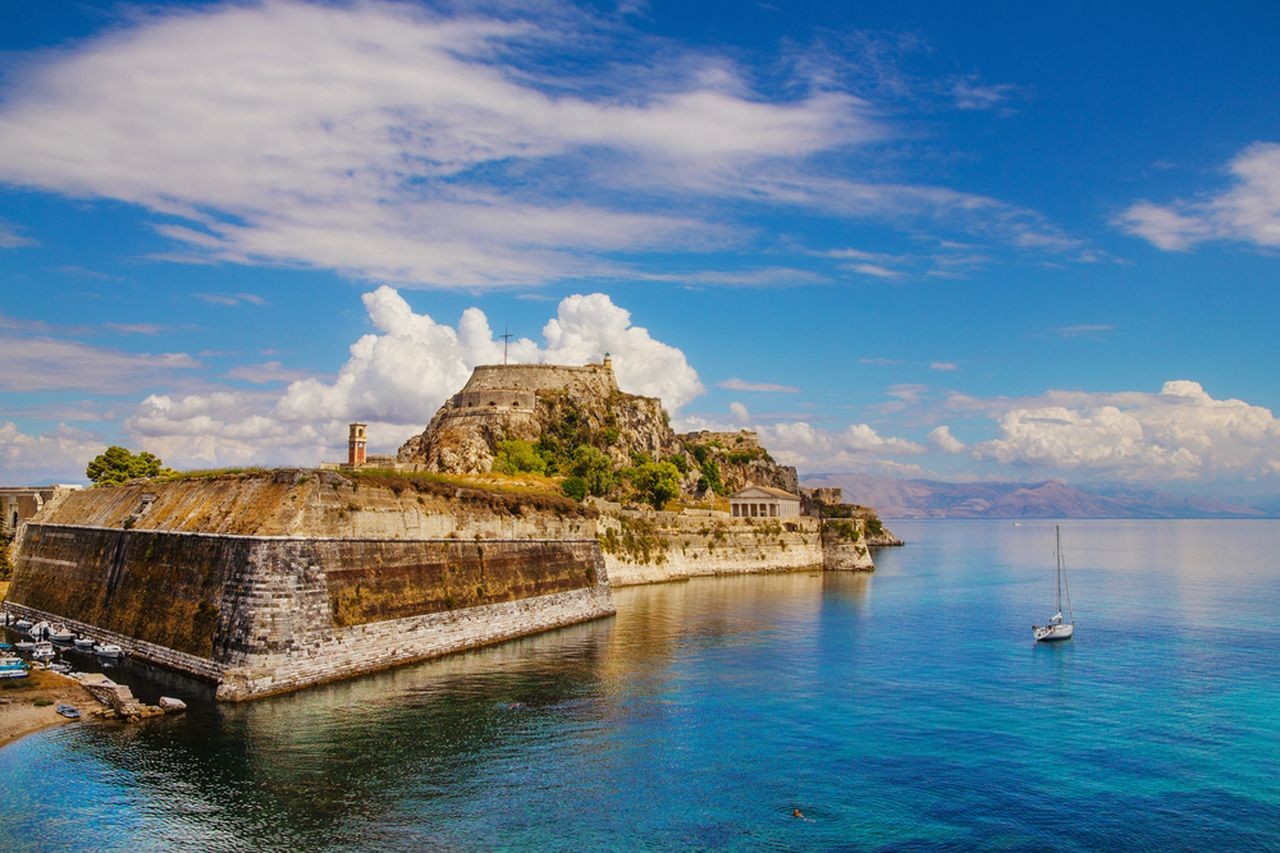 Palio Frourio (which means old fortress) is located at the edge of Spianada and stands out from the outskirts of the city, being one of its most photographed spots. The temple of St. George, reminiscent of an ancient temple in its construction, the ancient trench, called Kontra Fossa, which highlights the importance of the fort, as well as the two towers, the Tower of the Land and the Tower of the Sea, make up the impressive building complex.

The Old Fortress of Corfu has been its guardian since the 6th century when it was built by the Corfiots with the ruins of Paleopolis, the ancient city destroyed by raids. It was the city of Corfu until the 15th century, and then turned into a military area. Although it was never captured after a siege, however, Byzantines, Venetians, French, Russian, English, Greeks, Italians and Germans passed from here.

Mandraki, the small harbor full of boats, with the beautiful Soranza gate, awaits you on the north side of the peninsula, while stone stairs lead to the highest fortification level where you can enjoy panoramic views of Spianada and the Old Town, the Bay of Garitsa and the Vido. In the open air space of the fortress, called Versicada, cultural events are organized. 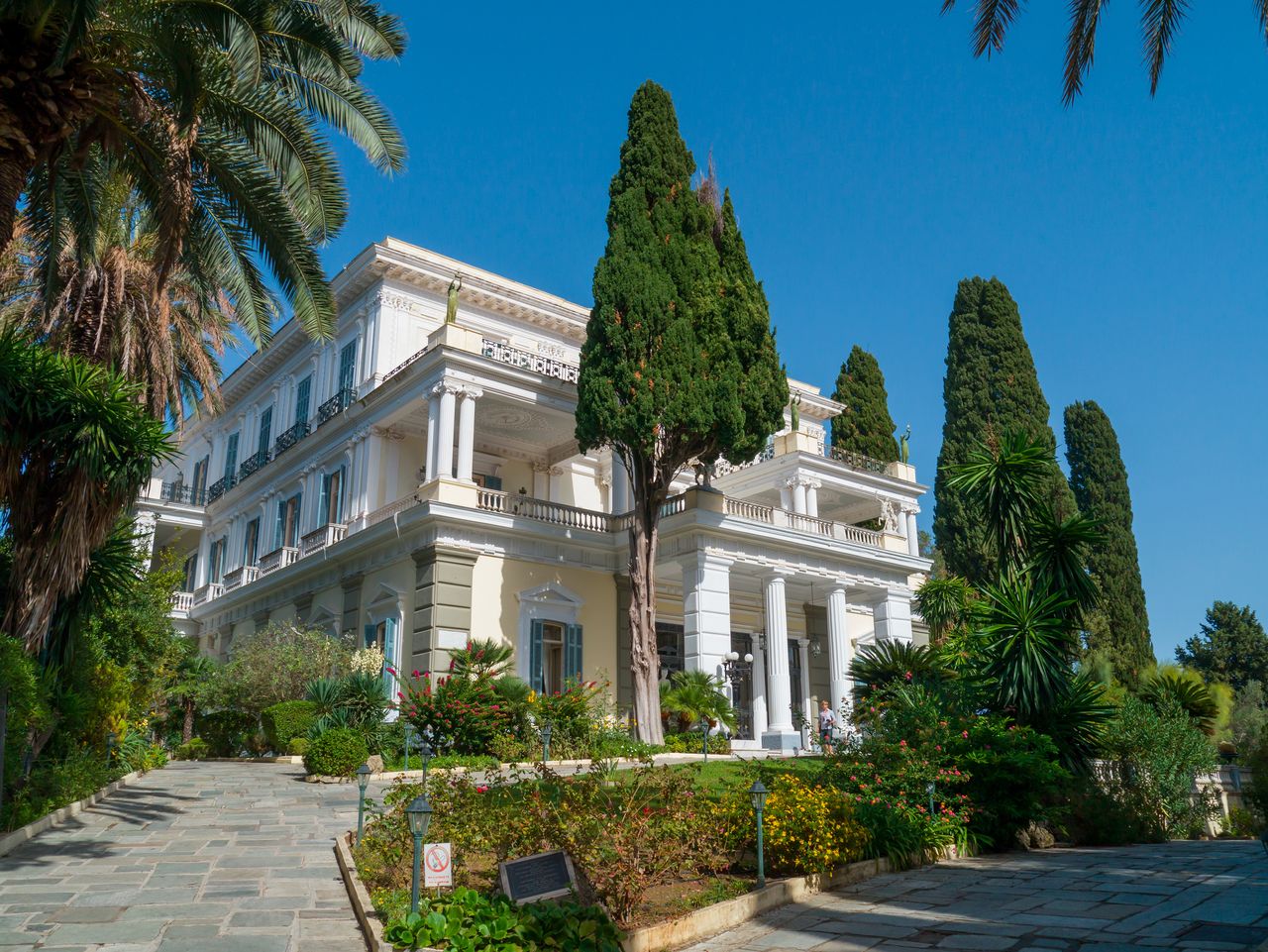 Achilleion of Corfu is the impressive palace created by the the Empress Elisabeth of the Austro-Hungarian Empire, known as Empress Sissy, in the Corfiot countryside. It is located in the village of Gastouri, ten kilometers southwest of the city of Corfu, in the olive groves and the lush nature of the island.

The tour of the palace, filled with great works of art, is an experience that will leave you enchanted, as through works by prominent artists, you are informed about the history of the place, Corfu, Greece, and the personality of the Empress, who loved the island.

The building was completed in 1890 and is dedicated to the demigod Achilles. It is decorated with statues and works of art from ancient Greek mythology, and after the assassination of Empress Sissy, it was bought by the Emperor of Germany, William B’, also known as Kaiser, who visited it many times until the outbreak of World War I War. 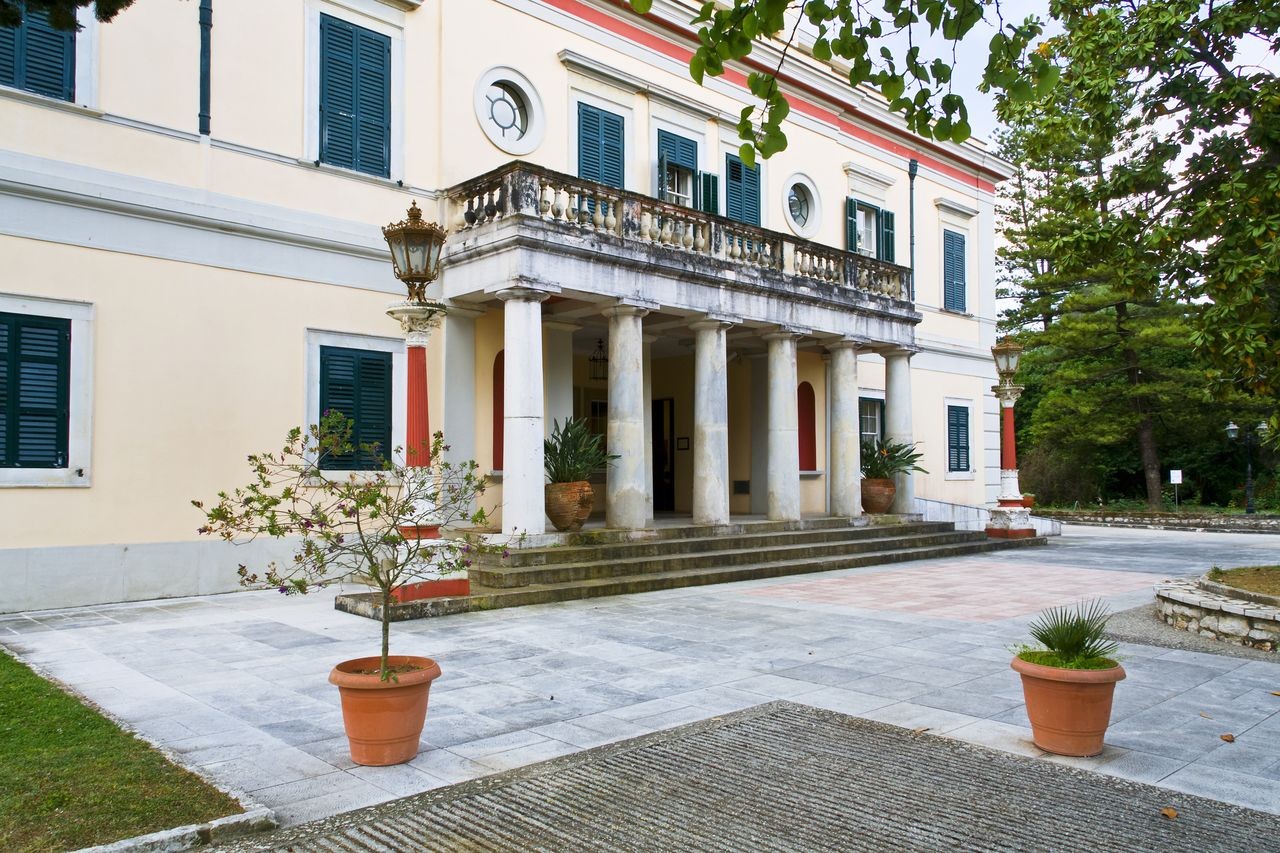 The green estate of Mon Repos, with a total area of 258 acres, is very close to the city of Corfu and includes an impressive palace with endless views to the sea. The palace of Mon Repo was built by the English Commissioner of the Ionian Islands Frederic Adam in 1831 and was granted to King George in 1864 and until 1967 remained in the royal family, which used it as a summer palace. Today, the palace houses the Museum of Paleopolis, the ancient city of Corfu, and is open to the public.

The very name of the palace gives its mark: It was given by George I and means “my rest” (Mon Repos). The ruins of the largest ancient temple of Corfu are very close to the palace, and you will also see the best preserved temple of the island.

The palace itself consists of two main buildings, a neoclassical rhythm one surrounded by an impressive, verdant garden, where it is estimated that more than 2,000 species of plants, from the smaller herbs and flowers, to the towering trees!

Palia Peritheia is a ruined, stone, Venetian village in northern Corfu, the 130 houses of which are architectural masterpieces that attract a lot of visitors. It is located at a distance of 8 kilometers from Kassiopi and 50 from the town of Corfu, built in the heart of Mount Pantokratoras, the largest mountain of the island.

The deserted mansions, which today have are inhabited by weeds and trees, the narrow cobblestone streets, the countless churches of  and the red bell tower of St. Jacob the Persian will impress you. Old Perithia was abandoned by its residents in the 1960s when the last families settled in the new, seaside, modern village. However, in recent years a systematic attempt was made to revive the atmospheric village with the stone architectural masterpieces.

Book your flight in airtickets.gr!